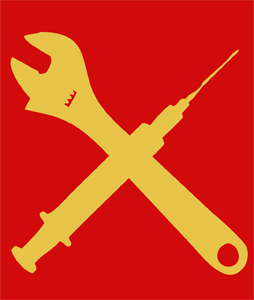 The Intergalactic Society of Clones and Cyborgs (otherwise known as the SSICC, the Société Spatiale Intergalactique des Clones et des Cyborgs), is a free society dedicated to the independence of humans, artificial humans, and the cybernetically enhanced.

The SSICC was founded in 3435, after the Rebellion of the Clones,  as a spinoff of the FAHL after the signature of the Declaration of Rights of Artificial Humans. On their homeland, they are strongly tied with the government of the Free Republic of the Desert (FRD), a little country located in a giant desert they manage to aiersform to an extend, and to defend against local planetary forces until then.

While they are overall autocratic and closed on themselves, the planet of Dameth and the government of the same name sheltered GENOTECH, a sub-company of GENTEK specialised in genetic enhancement of humans and animals. GENOTECH carried a mission to be the spearhead in improving the abilities of genetically created humans. They conducted groundbreaking experiments, notably on political prisoners provided by the Republic, and managed to code an experimental genetic sequence they considered satisfying and ready for the test - that was the Next 108 project, where one hundred and eight children were genetically engineered with the same genetic code, with a few minor variations among them for experiencing purposes. The project was vented out by the Lt. Vassili Epitavski, leader of a motorised cossack unit, and it created a political scandal on the country scale. To hide their ties with GENTEK and GENOTECH, the government of the Republic cancelled the research, seized the discoveries and imprisoned the responsible scientists. GENOTECH answered by attacking it with its local force, the SFP, and a ten years war followed.

Local forces of the Republic received an unexpected assistance from international squads of the FHAL, and while fighting with lower grade equipment, the Republic achieved victory on 3432. GENOTECH officially disbanded, and its remaining clones and scientists were re-incorporated into GENTEK main house.

Yet, as a result, the Republic and the newly formed local FAHL remained two competing forces on the little planet, and turned against each other less that one year after. In 3433, the FAHL captured Noyau, one major city of the Republic. They fought heroically against the government forces, but were ultimately pushed back and a systematic massacre ensued. The FAHL then retreated into a desert they manage to turn into an inhabitable place, and taking advantage of the inhospitably of the place, they founded the small Free Republic of the Desert (FRD). The Republic launched two assaults on it, but after being driven back with ease, and lacking the technology to wage war in such a territory, they eventually - but unofficially - gave up.

The FRD attracted a lot of freedom fighters from all over Ots, having the reputation of being a country of rights and equality, and despite all odd, it prospered both in terms of economics and demographics. The FRD resumed the researches of GENOTECH, and in 3434, they formed their first battalion of clone soldiers, ensuring their independence in the long run, at least against the conscripted army of the Republic. A peace treaty was soon to be signed.

After the end of the war, which coincide with the end of the Rebellion of the Clones (3435), parts of the FRD army had no purpose, and reconverted to piracy - land piracy at first, then galactic piracy soon after. After the incident of the S.S.Potemkine - the remarkable capture of a GENTEK armoured Cruiser by rogue officers of the Republic, and its gift to the FRD, it began to be necessary to create a new organisation to prevent retaliation from GENTEK corporate army on the FRD.

Parties involved, ex-republic officers, clones, cyborgs and FRD officials decided to call themselves The Intergalactic Society of Clones and Cyborgs (SSICC), or "The Intergalactic" in short.

The SSICC quickly became the unofficial spacial navy of the FRD, which funds it backhanded. The FRD lacking the technology to create its own navy, the SSICC quickly specialised in boarding and capturing corporate ships in the region, offering them to their homeland or keeping them to intensify their attacks.

The SSICC is considered to be a terrorist organization, which it is beyond the shadow of a doubt, but they follow a strict code of conduct and a narrow political line : they never attacks when it might launch a war, and their priority targets are corporations or government they judge corrupt or oppressive - Azimuth Pharmaceutical, Kasparov CIA, GENTEK and - of course - the Republic own's fleet, being their targets of choice. Their members swear to protect and promote equal rights for Biological and Artificial Humans and to fight against tyranny wherever they might be.

Relatively small in terms of size, demographics, and technology, especially at the time of intergalactic empires, the FRD lacked any means to launch a viable space program of any kind.It was technologically outrun by the Republic on their own home planet, the Republic itself being considered backward and negligible in the grand scheme of things. The only way the FRD had to make itself visible and recogned with was the SSICC, founded after the capture of the armored cruiser Potemkin, from GENTEK.

Financed, fuelled and crewed by the FRD government, the SSICC acts like unofficial privateers on their behalf. Is considered SSICC member any crewman of the Armored Cruiser Potemkin, of its escort fleet or the ships they captured from now on. Most of them are clones created by the FRD operating the old GENOTECH facilities on their lands, but a necessary part of the crew is also made by ex-GENTEK naval officers, now re-hired to teach and train new sailors.

The Creator of the Intergalactic Society of Clones and Cyborgs is Number-Seventeen. http://number-seventeen.deviantart.com/ 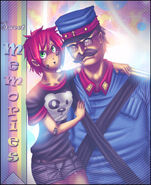 A younger moment between Megan and Vassili.

Propaganda Art for SSICC Recruitment featuring Corvielle and Gen. Epitavski
Add a photo to this gallery
Retrieved from "https://aiers.fandom.com/wiki/Intergalactic_Society_of_Clones_and_Cyborgs?oldid=14509"
Community content is available under CC-BY-SA unless otherwise noted.