By far the most common artificial human produced by the Megacorporations, the Jako are mass produced multipurpose clones for just about anything from manual labor, to companions for nobles, and even warfare.

Originally created by Nortenz, due the problem of an aging population, slow vegetative grow and lack of volunteers to the armed forces, they determined to create artificial humans to serve in a fleet and armed forces in need to expand to face the Federal Republic of Bazikstan, RFB.

These clones were to serve for 7 years the armed forces, however, once they were done, they were designed to become citizens and settlers of new worlds for Nortenz, so in difference to the military Albertonian, the super-human dreselandeses and the standard Regults, these clones were to be loyal enough to go anywere they are ordered to, work in anything, and be specially resistant to live for years in spaceships and space stations without this being perjudicial for their health: and once ready with their military live, to live a happy civilian life:

The idea was later adopted by the Megacorporations and many other nations, for a population easy to manipulate and control.

The Jakos are designed to be cheap labour, resistant to fatigue, hardy, cooperative, dependable and loyal:

They need less food, less water and less oxygen than any other artificial or biological humans, they are as well engineered to resist psychological privations better than humans to live in artificial atmospheres -as spaceships, spacestations and planets being terraformed-, as well as being more resistant to physical damage and poisonous envirmoments, with an improved healing factor.

However, they aren't very strong, and they are engineered to be dependent on their superiors, to loyally follow orders, and their inner chemical and hormonal balance was to keep them happy, avoiding depression and other psychological diseases very common in other Artificial (and biological!) humans, making them as well more peaceful and cooperative:

This makes them an easy population to handle and to work with, but in general as soldiers -one of their first roles they were created- they are lacking the 'nature' for it: However, they can be trained and as ordered act, but will lack the initiative.  Jakos run a wide variety of looks from the classic blonde to redhead to brunette with different body types and features depending on the corporation, world, or location.

A timid and mysterious Shik artificial human, owned and created by the Norodor Empire. Her purpose was being the second navigator assistant aboard one of the biggest heavy battleships of the Norodor Empire , the Yǒnghéng yāo. Karen usually  goes under her codename K4-R3N, which induces a sense of responsibility over her, although none is expected from her.

Orginally from the story To the Power of Two by Toni Babelony. 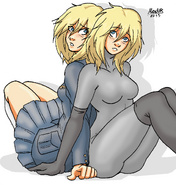