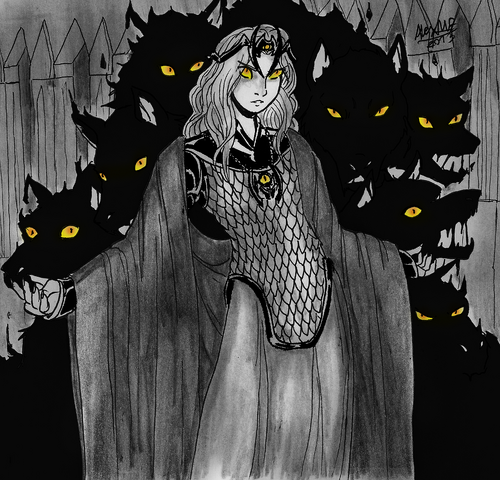 As many of the other princes of the Dark Legion, he was from the original Exiled Ones, the demons that will first appear in the Mount Satanmet of the Island Demonatch at the 1365 a.a.H, being a member of the First Dark Legion, he was one of the Seven Demon Princes.

The Nigromante of Tok-Thoria was called by many names. As well, he had many forms, being called a shape-shifter. Often, he will appear as a young werewolf male. Others, as an elder man with a long beard. Other times, as a demon of fire, an armored knight, a dragon or as a woman: but never was known for sure, what was real, and what, myth.

Like the other demon princes, much mystery surrounds the Nigromante of Tok-Thoria.

The Nigromante was the first demon to adopt the form of a wolf, and is said to be the First Father or forefather of Werewolfs, being the strongest of them, and the more powerful shapeshifter, not limited only to wolf form, but many others. Aside of him, there are other mythical figures among werewolves who are supposed to be the First Father of their race.

After that, the Nigromante retired again to the islands, but his power will be several times challenged by the savage Tokerí kanovs, inhabitants of these islands, beginning a war against them at the 1728 a.a.H. (within the context of the Kanovhook wars).

First War of the PowerEdit

After finally subjugating the Tokerí Kanov, who became vassals -worshiping the demons as gods-, The nigromante raised the Tokerí as armies for the Dark Legion, taking part during the First War of the Power (2203-2223 a.a.H) in the southern campaigns against Uslen and in the islands: his armies and navies will be finally defeated by the caliphate of Blazakhov in the islands, and in the continent, he lost his armies in the Siege of Hortann, retreating to the islands and taking refuge here for the rest of the war.

With his power lost and legions dispersed, the Empire of Whide Axis didn't went after him when they exiled the other Great Demon Lords: and so, from the 2290 a.a.H, slowly the Nigromante began to act again from the shadows, encouraging the Tokerí kanovs to pillage and plunder, while he began to develop a new "weapon": the Kokto Orcs or so called Black Orcs, at the 2295 a.a.H. He decided this, because of the defeats suffered in the First War of the Power.

Creation of the Black OrcsEdit

Always in secret, he acted from the shadows, afraid of the return of the Whide Axis to finish him off: And slow but constantly, he gained back his power, while using the Tokerí for proxy-wars against his enemies: later as well, he began to organize whole populations of mostly Green Orcs, and in a form of mass slavery, will breed and condition them them and their offspring to create a tough and obedient orc called Kokto Orcs, or "Black Orcs" that had greyish green skin. In the early 2400s the Nigromante would begin to unleash the new armies of black orcs, or their expendable fathers that led to their creation, to test them in battle:

And so, for the 2430 a.a.H, the Nigromante of Tok-Thoria rose again in all his power, being a major player during the Second War of the Power.

Sure of his power in the sea of Tok, the Nigromante eventually declared the secession of Tok-Thoria from the Dark Legion at the 2483, defeating the armies send against him.

From this point, he followed his own agenda of expansion in the Sea of Tok, southern Aels and northern Zarhuy, as in the Blazakhov-Tok Thoria war of the 2531-2536, but he take a part as well in the War of the Four Black Kings (2536-2539) for the succession of the position of Satman the Fallen. Relations with the Dark Legion will become better, and Tok-Thoria will become allied with the Dark Legion.

At the 2540-2542 will be fought the second Blazakhov-Tok Thoria war, and at the 2548,the third one. While his orc armies and fleets were defeated, and must agreed in the 2582 that the Blazakhovian install trading posts and factories in Tok-Thoria, the Nigromante was preparing new armies, to replace the black orcs:

The Pixerian warforged, that will be the back spine of his legions during the Third War of the Power (2633-2675 a.a.H).

He will be finally vanquished in The Cataclysm that ended the Third War of the Power, at the 2675.

Retrieved from "https://aiers.fandom.com/wiki/Nigromante_of_Tok-Thoria?oldid=16532"
Community content is available under CC-BY-SA unless otherwise noted.