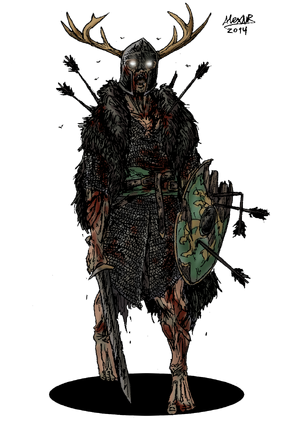 An undead is a being in Aiers mythology, legend or fiction that is deceased yet behaves as if alive. A common example is a corpse re-animated by supernatural forces by the application of the deceased's own life force or that of another being (such as supposedly, a demon). Undead may be incorporeal like ghosts, or corporal like zombies. The undead are featured in the belief systems of most cultures, and appear in many works of legends, fantasies and stories.

Some argue however that the title "undead" is confusing, as the un-dead should be instead the living ones that aren't dead, but is often used in the sense of a supernatural being which had at one time been alive and continue to display some aspects of life after death.

They are often divided in two groups: Living corpses and incorporeal spirits, and some are portrayed as unintelligent creatures, while in others have animal-behaviors, or can be extremely intelligent and cunning.

Th stories of undead were shared by humans, elves, orcs, dwarves, draak-harg and beast-men alike, each with their own cultural variations: in general, they were considered malevolent creatures, full of envy of the living. Only among the Zäghal Dark elves will this change, to make them instead to be neutral, meanwhile in the culture of Brûm, they were servants.

For example, in northwestern aelian human-Christian culture during the Dark Ages of Demons, the stories about revenants had common features: Those who return from the dead are wrongdoers in their lifetime, often described as wicked, vain, or unbelievers. Often the revenants are associated with the spreading of disease among the living. The appropriate response is usually exhumation, followed by some form of decapitation, and burning or removal of the heart.

In Polforian human and Kanov myths meanwhile, the undead, rather than malicious, individualized persons, were instead anonymous masses, raised by powerful necromancers, lichs and demons from the dead ones of the wars of Polforia, to serve as their undying servants.

The origin of the myths are believed to be either in the fear of the unknown, and others say as an explanation to the grave robbers.

While aside of the myths, there don't exist undead in Aiers -Vampires being instead demons, but some classify them as undead-, Dark Elves and Demons did indeed work sometimes with corpses, creating what is called "flesh golems": however, due to the quick decaying, rather than this being seen as a viable way of making servants, was many times done as experiments or exercises in dark arts academies.

In such a way, the Dustlands of Brûm, a kingdom of Polforia founded by the Black Dragons, succeeded by the Masked Necromancers, was known for the existence of a cult to the death and undead.

Retrieved from "https://aiers.fandom.com/wiki/Undead?oldid=8337"
Community content is available under CC-BY-SA unless otherwise noted.